Start a Wiki
Ant-Man (Skrull) is a Skrull posing as the real Ant-Man and a member of the Skrull Avengers.

He was amongst the Skrull Avengers during their mission to infiltrate Wakanda and steal vibranium. But eventually, he and his teammates were defeated by their human counterparts so when Wasp punched him, she remarked on how good it felt, reflecting her frustrations with the true Hank Pym.

Ant-Man (Skrull) has the similar powers of the real Ant-Man through his replicas of the Pym Particle suit.

Ant-Man (Skrull) fights with replicas of the Pym Particle suit, belt and helmet. 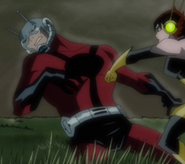 Ant-Man (Skrull) meets his defeat by being punched by the real Wasp.
Add a photo to this gallery

Retrieved from "https://avengersearthsmightiestheroes.fandom.com/wiki/Ant-Man_(Skrull)?oldid=40612"
Community content is available under CC-BY-SA unless otherwise noted.