"Amora the Enchantress. I should've known that witch would be involved in all of this. I shall enjoy making her pay."
―Sif about Enchantress[src]

Sif is a female shield maiden and warrior in the magical kingdom of Asgard. Her skill in battle is second only to Brunhilde the Valkyrie among Asgardian females. She has a great dislike of Amora the Enchantress for reasons that remain unknown.

Sif is a young Asgardian woman who was born in the magical dimension of Asgard. There, she grew up alongside Loki, Thor, Brunhilde, and Amora the Enchantress. It is presumed that she eventually began to train to become a shield-maiden, and became an incredible lady warrior.

She was seen leading the Valkyries alongside Brunhilde against a trio of Frost Giants who had besieged both Giant-Man and an unconcious Wasp. She later showed that she was a remarkable swordswoman and equestrian, and commented on both Giant-Man's status as a giant and man, as well as her hated rival Enchantress. Sif assisted in several battles during Loki's war, but was defeated. She was later present when Odin took his place on the throne, and cheered for the Avengers alongside her fellow Asgardians.

"I would lend my sword to your battle if you would have me."
―Sif to Beta Ray Bill[src]

Sif overheard how Thor missed Jane Foster, a mortal from Midgard. She interruped them remarking Thor that he should return to Midgard. Thor went away after Odin arrived and reported that Surtur was missing from Muspelheim and the Warriors Three reported that something was troubling Heimdall and Thor checked it out.[1]

She was present when Odin summoned Beta Ray Bill who was holding Mjolnir. She attacked without hesitation the Korbonite, but was easily defeated. He was then taken hold by Odin and summoned Thor. Bill explained his backstory and Sif offered to help him to save his people from the Fire Demons and offered her sword afer Odin rejected the proposal of Thor giving Mjolnir to him and suggested that they should take him to Eitri. Sif watched through how Thor convinced Eitri to make a hammer for Bill.[1]

Sif is a young woman who has thick black hair that reaches her mid-back, who is short in stature compared to some other Asgardian women. She wears red and silver Norse themed armor and carries both a sword and shield into battle. Her eyes are gold in color. .

Sif appears to be an honorable warrior who is quite brave and ready to charge into battle no matter what the consequences. She, like other Asgardians, underestimates the battle prowess, intelligence, and worth of the mortals from Midgard. This seems to have cleared up thanks to the Avengers.

She seems influenced by Thor's heroic actions on Midgard, as she protected Skuttlebutt and its cargo of frozen Korbonites from the Fire Demons.

Sif is an Asgardian and a "goddess". Thus, she possesses the superhuman physical attributes that are attributed to Asgardians. She is stronger, faster, and more durable than the average human. She is also able to participate in intense physical activity far longer than humans. Her strength is greater than most Asgardian females, and is on par with most Asgardian males. She can lift about 30 tons. Her Asgardian attributes aside, Sif is an incredible warrior, who uses both sword and shield in battle. She is also a fair equestrian, as she was able to ride a flying horse with ease and skill.

She possess a shield and a unique battle sword that transforms into a ranged magical blaster as she used it against the Fire Demons inside Skuttlebutt.

Sif with Panther and Hawkeye 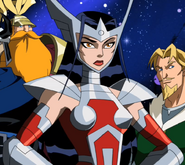 Add a photo to this gallery
Retrieved from "https://avengersearthsmightiestheroes.fandom.com/wiki/Sif?oldid=40761"
Community content is available under CC-BY-SA unless otherwise noted.