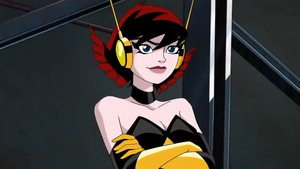 Wasp is a female superhero. Her real name is Janet Van Dyne, a college student who works with Hank Pym at one of New York city's universities. She is one of the founding members of the Avengers and gave its name. Wasp is enthusiastic about being an Avenger, and crime fighting in general. She appears shallow at times, but beneath it all she is a compassionate person who is willing to reach out to others in need, and genuinely cares about others. An opinionated individual, Wasp is not afraid to share what is on her mind and firmly stands up for what she believes. She likes to have fun, and hates being bored. She is laid back and light hearted, and finds seriousness stifling.

Vote for or Nominate the next Featured Article

Retrieved from "https://avengersearthsmightiestheroes.fandom.com/wiki/The_Avengers:Earth%27s_Mightiest_Heroes_Wiki?oldid=36363"
Community content is available under CC-BY-SA unless otherwise noted.